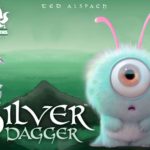 Whistle Mountain
0 out of 5
( There are no reviews yet. )

Silver Dagger is a highly rated light 2 to 4 player game for ages 8 and above that takes around an hour to play.

Silver Dagger is the fourth standalone game in the Silver series of fast and engaging card games.

In Silver Dagger, as in the other Silver card games, everyone starts the game with five face-down cards, with everyone being able to see two cards of their choice. Cards are numbered 0-13, with the number showing how many werewolves the character on that card attracts, and each character (number) has a different special power.
On a turn, you draw the top card of the deck or discard pile, then either discard it to use the power of the card (but only if it came from the deck), discard it without using the power (ditto), or replace one or more of your face-down cards with this card; you can replace multiple cards only if they bear the same number, and you must reveal the cards to prove this, being penalized if you’re wrong.
Silver Dagger contains 14 new roles and abilities not seen in the previous titles, some of which allow you to strategically switch the direction of gameplay, the #4 zombie in particular! As might be expected, zombies are tough to get rid of; in game terms, you can’t place them on top of the discard pile, and they need to be face up in order to pass them to the previous player. The game also includes helpful roles such as the debt collector, which subtracts a point for each card held by your opponents, and the halfling, who has the power to divide your entire score for the round in half.
As in other Silver games, call for a vote when you think you have the fewest werewolves circling your village. Your opponents will then have only one more chance to save themselves — or to sabotage you!
The Silver series is made to mix and match! Pick out roles to fill the 0-13 slots from Silver Amulet, Silver Bullet, Silver Coin, or this title to create your very own custom deck.