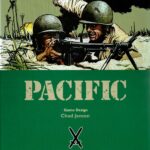 Combat Commander: Pacific is a highly rated intense 2 player game for ages 12 and above that takes around 3 hours to play. It is also ranked as one of the best war games on Board Game Geek.

Combat Commander:Pacific is a card-driven board game covering tactical infantry combat in the Pacific Theater of World War II. CC:P’s main theme is the addition of three new factions to the Combat Commander family:

Buy Combat Commander: Pacific and other great Board Games only at Bored Game Company.

Imperial Japan
the Pacific US – with a strong emphasis on the US Marine Corps
the Pacific Commonwealth – focusing on Indian and ANZAC forces
CC:P is a stand alone game in the card-driven Combat Commander game series. While utilizing Combat Commander: Europe’s basic rules, CC:P includes numerous rule tweaks and additions in order to more accurately portray tactical warfare as experienced by the participants in and around the Pacific and Indian Oceans. This slightly ramps up the complexity of the Combat Commander series while at the same time imparting a bit more depth and realism. Just a few of the additions include:
Banzai attacks;
BARs and Thompson SMGs;
Beach landings & river crossings;
Hidden movement;
Caves;
Scouts;
Aircraft;
Bayonets;
Mortar spotting;
Treetop snipers;
Reconnoitering.
SCALE: Each hex of a Combat Commander map is roughly 100 feet across (about 30 meters). Each complete Player Turn abstractly represents several seconds of real time. Each complete Game Turn abstractly represents several minutes of real time.
UNITS: Due in part to the unique composition of late-war USMC squads and the imbedding of specialized weapon teams within IJA squads, the units in the game are represented by 4-6 man Teams and 8-13 man Squads. Radios — and individual weapons larger than a rifle — are represented by their own counters. Individual Aircraft are also represented with their own counters.
VICTORY: Players attempt to achieve victory by moving their combat units across the game map to attack their opponent’s combat units and occupy as many objectives as possible. The degree to which a player succeeds or fails is measured by a scenario’s specific Objective chits, the destruction of enemy units, and the exiting of friendly units off the opponent’s board edge.
GAME FLOW: A game of Combat Commander is divided into several Time segments. There is no sequence of play to follow, however: each Time segment is divided into a variable number of Player Turns, each of which may consist of one or more Fate Card “Orders” conducted by the active player. Fate Card “Actions” may generally be conducted by either player at any time. “Events” and die roll “Triggers” — both good and bad — will occur at random intervals to add a bit of chaos and uncertainty to each player’s perfect plan.
CC:P includes twelve maps featuring terrain specific to the PTO.
CC:P’s playbook includes:
twelve scenarios.
Pacific version of the Random Scenario Generator utilizing the new maps and nationalities. This random scenario system provides an almost unending variety of map configurations, force structures, and combat situations.
section detailing the differences between CC:P and Combat Commander’s first two volumes in order that players familiar with those earlier games can jump right into their first scenario with minimal rules reading.
examples of play.
Design & Development notes as well as numerous play hints.
Components:
352x large counters (5/8″)
280x small counters (1/2″)
220x 2.5 x 3.5 cards
6x 2-sided 17 x 22 maps (twelve maps in total)
3x 2-sided 8.5 x 11 nation-specific player aid sheets
2x 1-sided 8.5 x 11 generic player aid sheets
1x 32-page Rulebook
1x 32-page Playbook
1x Track Display
NOTE: Combat Commander:Pacific is a stand-alone game. You do NOT need to own any other Combat Commander game in order to play it, though familiarity with the system would be a plus.